Much of the archive of the “Ancienne Maison Ls. Audemars & Cie” had been discarded over the 74 years of its existence. 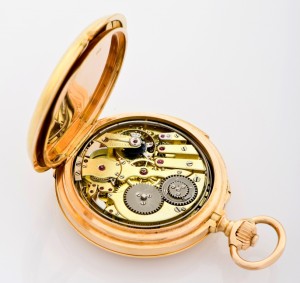 founder) brought the rest of the archive, the awards and the medals to London when he set up the last “successor” company, Louis Audemars & Co., in the 1920s.

In the early 1940s a German fire bomb destroyed No. 66 Hatton Garden where Louis had his offices, and the archives, awards and medals were lost.

In the early 21st century, but after the publication of Herr Zantke’s book, a number of 19th Century record books were discovered.

In 2013, four more were discovered, two of which have enabled a far greater list of serial numbers (Link) and customers than had previously been known.

An undated slip of paper was also found listing 50 watches selected for an exhibition.  The watch numbers and a note on the back of the slip indicated that the list was compiled in about 1873 in which year the Company exhibited at the Universal Exhibition in Vienna Austria.  More recently this has been confirmed by an analysis of the serial numbers.

The most important records now consist of nine ledgers and that list.