The “Lost” ledgers (Link) contain several thousand entries so we have been able greatly to expand the lists of known Louis Audemars serial numbers. Many watches and movements were sold to customers who signed them with their own names, so the now known numbers enable identification of many pieces as Ls. Audemars products even though marked with a different brand.

We have added numbers from the list of “notable watches” recorded by Louis Audemars-Valette in his “Notice Historique“, written in 1922 (see Ls. Audemars & Cie) as well as those numbers recorded by Herr Zantke which do not occur in our archive.

More recently we have added 3277 numbers extracted from Ledgers 8 & 9 (Link) and from the Exhibition list (Link) discovered at the end of May 2013 .

We now have  nearly 12900 ledger entries but as many of the numbers repeat across the ledgers (which roughly cover the period 1848 to the 1885 bankruptcy) the records  condense down to around 8750 serial numbers.

(A booklet listing all the now known watch and movement serial numbers is available to order through our contact page (Link), priced at £Stg 30.00, including world-wide postage). 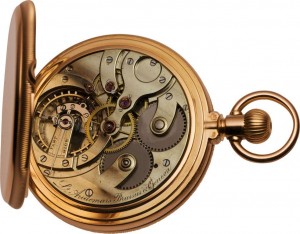 The very great majority of Ls. Audemars serial numbers were 5-digits long, with some 3- and a lot of 4- digit references from the newly discovered books.

We also have a discontinuous run of 379 6-digit numbers, 100767 to 285129.  These are all watches or movements sourced from factories other than the Ls Audemars factory in Le Brassus, all bought for finishing and for sale by the Audemars London depot (see Ledger 5).

(A six-digit serial number in a watch signed “Ls (or Louis) Audemars” is almost certainly a product of one of the successor companies established after the 1885 bankruptcy – click Here for more information).

The complete list of serial numbers is incorporated in the french edition of the history of the Company published in May 2014 (further details are in the French language section of this site)..