Several correspondents have asked what we know about the people who worked for the Ancienne Maison Louis Audemars & Cie.

Until recently the answer was, not a lot.  But recent discoveries enabled us to piece together some lists of names.

These lists must be treated with extreme caution.  They are not complete records of employees and suppliers.  They were included in the accounts as lists of individuals described as “Ouvriers – Horlogers”  ( = “Workers – Watchmakers”) and minor, mostly local, suppliers, who owed, or were owed, money at the time the accounts and inventories were compiled.  So they are snapshots, not complete employment records. 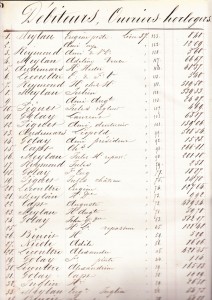 The book-keeping was not very good, there are many abbreviations and much is illegible.  Also, so very many of the family and given names were the same that individuals were frequently designated by their nicknames, their father or mother, where they lived, even their rank in the citizen army.

Nicknames included “Berger” “Loyal”, Chasseur”, “Chateau”, “Président” (used several times and possibly referring to the current chairman of the Commune), “Trompette”, “Gédéon”, “Musicien”, “Napolitain”.  Descriptions varied from one set of accounts to another and where – for example – an individual is designated by his living in a particular place, the location could have changed by the time of the next or subsequent accounts – or possibly he might be desgnated by his name instead of a previously-used nickname;  so a fair amount of guesswork was needed.

There is, predictably, a number of people with the Audemars family name.  It was a common name in the region.  Not all were closely related to the partners.

Without access to a multiplicity of family trees – and infinite time to study them – there is no possibility of precise analysis and there are certainly some duplications, inaccuracies and anomalies.

Even so I was very surprised by the large number of men, and some women, involved in the Ls Audemars production process, many of whom must have been self-employed, working either in the ateliers at the Cret-Meylan or at home.  There were also some local “businesses” or partnerships supplying the enterprise.  (Books 8 & 9 show separate lists of more “commercial” suppliers of horological wares).

All these people had a part in the story and I am very happy to be able to record their names.

The full list with dates is included as an appendix to the French edition (Link) of The History of Louis Audemars & Cie published in May 2014.  The English edition is now out of print, but I am happy to supply a print-out of names and dates, if a request is made through my contact page (Link)